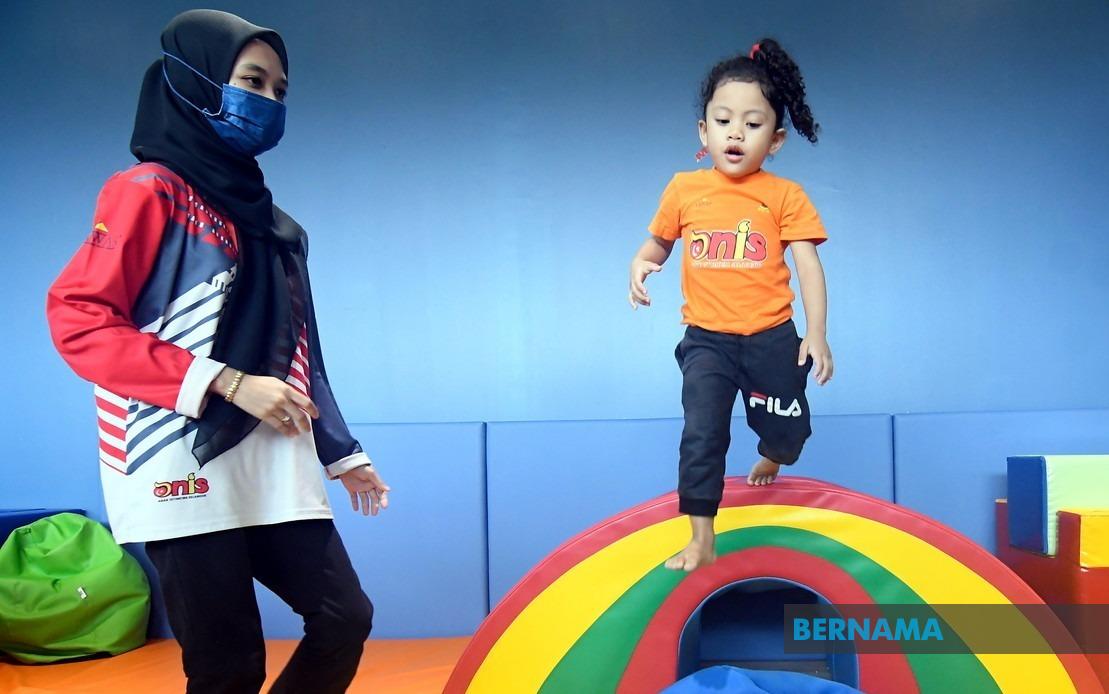 KUALA LUMPUR (Bernama) – The swing stands out in the middle of the spacious and bright playroom-cum-gym, hanging about a foot off the floor. It is bulky and awkward, with a large square seat and four pieces of rope connecting it to four bars on top.

A small boy, a big grin splitting his face, sits on the swing with his watchful mother behind him.

The swing may look a bit odd – looking like one half of a balance scale – but that is because it is set up for balance. If the child on the swing does not sit squarely in the middle with their legs cross-legged to distribute their weight equally, the swing will tip to the side. And if they are not holding on to the ropes, they may tumble off.

Most children grasp the ability to balance instinctively without having to be taught, but since five-year-old Muhammed Syafiq Aqil has Autism Spectrum Disorder (ASD), being able to swing is a major milestone.

“He can hold on to the ropes now. He can sit down. He can listen to instructions,” marvelled Nurilyana Awang, his mother. A year ago, this was unthinkable.

According to the World Health Organisation (WHO), ASD is a diverse group of conditions, characterised by some degree of difficulty with social interaction and communication. Other characteristics include difficulty transitioning from one activity to another, difficulty focusing on details and unusual reactions to sensations.

Although Muhammed Syafiq’s autism is not severe, Nurilyana told Bernama he would not have been able to go on the swing last year because he would have insisted on standing and jumping on it. Neither would he be able to stop flapping his hands, a common repetitive behaviour associated with autism.

“The only thing left is focus. It’s still hard for him to focus but he has improved a lot since then,” she said.

What turned it around for the 38-year-old human resource executive was the one-on-one session her son has been receiving weekly at the Selangor Special Needs Children’s (Anak Istimewa Selangor or ANIS) Early Education Support Centre. He started attending sessions at its primary branch at the IDEAL Convention Centre (IDCC) in Shah Alam in March this year.

What got her over the moon was that the early intervention programme, a Selangor government initiative implemented through its foundation Yayasan Anak Warisan Selangor, was free of charge, something the single mother of two is eternally grateful for.

The brainchild of Dr Siti Mariah Mahmud, who is the state exco member in charge of Health, Unity and Women and Family Development in Selangor, the centre at IDCC began accepting students in August 2021. A second centre opened in Section 7, Shah Alam, two weeks ago.

Dr Siti Mariah told Bernama she decided to set up the early intervention and preschool programmes after hearing from parents of disabled children, many of whom could not afford the cost of sending their kids to private institutes.

“What triggered me was the parents – the lamentations of the parents – most of them, when I speak to them, say, ‘We are very worried about our children. What will happen to them when we are no longer around?’” she said.

She added setting up the support centre for special needs children and their families would be more impactful and has lasting benefits than providing cash transfers to the said families.

She and her team consulted with multiple non-governmental organisations that deal with autism and other special needs, such as the National Autism Society of Malaysia (NASOM). Although work started in 2018, COVID-19 lockdowns and restrictions delayed its launch, which is slated for next month.

Presently, the centre accepts children who have been diagnosed with ASD; Global Developmental Delay (GDD), which is the umbrella term for children who miss their development milestones; Down Syndrome, a chromosomal disorder and Attention Deficit and Hyperactivity Disorder (ADHD), a neurodevelopmental disorder. The centre currently has 55 children, most of whom are autistic, with plans to enrol more.

NASOM psychologist Grace Liew said early intervention helps children to learn and adapt to people and society’s expectations of them.

“Children who have good early intervention will have better problem-solving skills later as well. And they will be a bit more sensitive to other people’s emotional changes,” she said.

Children aged between two and four are usually sorted into the early intervention programme, where they learn life skills including potty training and social skills and fine motor skills. Some examples of motor skills are learning how to button a shirt and use a pair of scissors.

Older children aged five and six who have progressed enough can join the preschool programme under ANIS, which is the educational component where children learn to read, write and count. After that, they join the public school system, be it mainstream classes or “inclusive” classes reserved for children with disabilities.

The ANIS centre, located on the ground floor of IDCC, is big, spacious and airy, with a therapy and activity room, a general room for children and parents, and an indoor jungle gym called the Indoor Sensory Gym, as well as offices for the teachers and administrative staff.

At one end of the gym is a kiddie-sized climbing wall with footholds protruding for tiny hands and feet to leverage their weight on. In one corner is a ball house. Most of the floor is covered with squishy floor cushions, enough to absorb any falls and spills. In both the general room and gym, there is a seating area for parents to sit and watch and participate in lessons.

“We decided to train the parents along with (the children),” said Dr Siti Mariah.

“For us, when the parents come, we teach them what is important for them to know so that when (they) go back, (they) can practise,” she added.

To be enrolled in the centre, the children must be Malaysian citizens and residing in Selangor or were born in the state. They must also belong to the B40 and M40 income groups and have been officially diagnosed.

The biggest challenge the centre faces is diagnosis. Getting diagnosed with a developmental delay, such as ASD or GDD, can be difficult, especially if one lacks the funds. There are only so many experts available and the demand for their services is high.

“Of course, we need the diagnosis first because everything is based on that,” said Manonmaney  Muniandy, coordinator at NASOM Titiwangsa.

The American Academy of Paediatrics recently published a report encompassing 12 years of findings and it recommends that early intervention start as soon as possible for better outcomes. In the United States, the average diagnosis is currently at four years old.

In Malaysia, according to the parents and experts Bernama spoke to, the diagnosis process can take months, even years – precious time that could be used to provide early intervention. Nurilyana, for example, said her son only got the ASD diagnosis when he was three years old despite her noticing he was not talking at one-and-a-half years of age.

Experts said some parents also delay getting a diagnosis because they miss the tell-tale signs of neurodevelopmental disorders either through ignorance or denial.

“When we opened the registration for the ANIS programme last year, we got a lot of applications. But then we found many of the kids were never officially diagnosed so we figured we should do it ourselves),” he said.

Dr Siti Mariah, who is also the state assemblyman for Serdang, said the centre employs therapists who provide a functional diagnosis for the kids to qualify for the programme. If parents need it, the centre also funds or subsidises the diagnostic process.

In the future, she plans to expand the service to other parts of the state to provide early intervention and education opportunities to families who are not able to travel to the urban centres.

“We have so many public libraries, more than 100. So we ask for space from them so that parents from rural areas can bring their children and consult with our staff there,” she said.

She added that the services will first be offered via a mobile unit of volunteers and staff who will drive to areas outside of the Klang Valley. She hopes to provide these services as early as next year.

As awareness increases and professionals become better at diagnosing special needs, the numbers will likely increase. It explains why the WHO estimates ASD affects one out of 100 children, even though the US Centers for Disease Control reports one out of 44 children is diagnosed with ASD.

Father-of-six Mohamed Hussain, whose youngest child has GDD and ASD, is glad to hear there are plans to open ANIS centres in other parts of the state.

“My request is that ANIS opens a branch in every district. Because I think there are more and more special needs kids every day (needing their services),” he said.